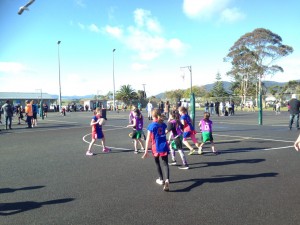 At Peria school we have a Saturday netball team.

So far we have won 2 games – recently our good friend Paige just left and moved away to Owaka near Invercargill, Isabella, Laniqua, Charli, Anamarie , Summer, Hermonie and Sahara have missed her being apart of the netball team this term very much. For her leaving we had a sleep over in the school hall with wheel barrow races and running races. The netball team is year 5 & 6 we have a great friendship between us at school. We have netball practice on Tuesday and Fridays and the games are on Saturday in Kaitaia.

These 2 terms have been great – lets hope for more next year !

About the Author: Isabella Maria

Search for an Author